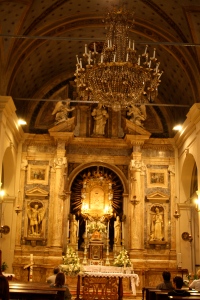 On that first morning in Montalcino, I strolled down to breakfast on the hotel patio that once were the barracks of the town. The outside wall plunged deep into the greenery below to reveal awe-inspiring views of the classic Tuscan landscape below. Picturing a table for one to enjoy the view, I was surprised to see a table full of people from my class that wasn’t to begin until evening. I nearly ducked and covered but was spotted and invited to join them. We exchanged names and cities of origin, made small talk and navigated the awkward beginnings of connection while I secretly planned my escape.
Janeen is a chef in her 70’s who doesn’t look a day past fifty. She is from New York with an accent and authority to match. After I had taken a few bites of my fresh yogurt and peaches, and doctored my tea just so she announced she was going to Mass, as if, of course, we would all join her. Without much thought, I nodded. Church sounded good to me. Mass though? I admit I felt a little intimidated. Being an English speaking Protestant pastor’s wife, fear of awkwardness has kept me from attending church in Europe where Catholicism dominates. I had been to a few Catholic Mass serviced with dear friends growing up, and that was difficult enough to feel like I fit in and could follow the routines, let alone the idea of trying to follow along in another language. Moments like these are good for me, to remember once again what it is like for someone to think of coming to church with me. I am always seeking to get past the culture of church that would ever make anyone feel like an outsider. There is something so beautiful about ritual though, and I have come to appreciate more and more the Catholic approach to following our shared savior.

Janeen charged us up the cobblestone hill to the church as if we were running late for the F-train to Manhattan.

“I have been to church everywhere I travel to. Synagogues, Mosques, Temples, wherever I can get my God fix while I travel.”

“Oh, I said” a little curious about what Janeen really believed. “So, what kind of church do you attend in New York?”

“Presbyterian” she said “I am a Steven Minister at my church there and attend every Sunday. I have to have my Sabbath.”

I just smiled at her and followed her confident stream into the Cathedral. There I watched her cues, and those of the locals, for the ups and downs and hallelujahs and amens. Themes became evident in the little bit of language I could translate. Then we began to sing and sounds were familiar. My heart started to beat faster and that familiar lump lodged in my throat. I sang through. The words that I stumbled and jumbled over in trying to speak the language flow effortlessly, beautifully even, off my tongue as I sang them. Italian hymns translated in my heart and I was worshipping the God I know intimately, who transcends language and culture, everywhere.

Then the Lord’s Prayer…

The familiar rhythmic hum, the same pauses, the purposeful prose of these words enveloped me into this community, reminded me why we do this together, why we gather. Never are we alone. Our God, our same God is with us, and we gather to celebrate and symbolize our trinitarian relational faith..

Padre Nostro translates to “Father Who is Ours” I love that.

Mass was followed by a long shared lunch under an umbrella on a patio in town. We shared the daily special ravioli and a salad as if we’d done it a hundred times before. She tasted my Chardonnay and I took my first sip of the trip of Brunello. After swapping stories about faith, kids, motherhood, careers and passions I was bonded to Janeen for a lifetime. My mother-like God-loving full-of-zest-for-life new friend from the other side of the country, on the other side of the world. 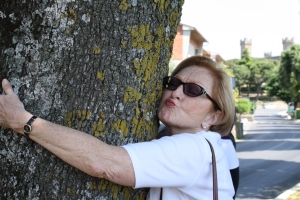 But suddenly I had arrived in Italy and Scott was with me and everything was as we had remembered on our honeymoon. I was happy and at peace. It was warm, the sun was shining and we were walking hand in hand down a cobblestone street in Montalcino, smiling at one another and taking it all in. The road was wide with tall stone houses all in a row to our left and the low town wall beside it with a view of the bright green Tuscan landscape rolling beyond. Even the furniture in our room was familiar, pieces had come from our home. I felt welcome and secure.

Then Scott was gone and I was walking by myself again along the road looking out over the bright green hills touching azure blue sky, signature cypress trees, and a few terra cotta colored villas when two parachuters came gliding slowly down from high above. It was a breathtaking sight, I felt the allure of their adventure. Except one was having trouble. The red parachute was billowing all around his body, sucked to him with only small pillows of trapped air inside. His arms and legs were flapping frantically to push it away and up so that it could gather air again. My heart was pounding as he started falling faster. I started running toward him. Someone must help him! I must do something!

Running closer I knew I was helpless. I was too far away. Immediately I prayed, big, strong, you-better-hear-me-God prayers and I ran to the edge of the green, then gasped for air, and jolted awake.

Body sweating, heart still racing, I was trembling as I looked at the clock, 4 a.m. I started to cry, the dream like a postcard image burning bright colors in my mind. It was too real, too symbolic. Was it process of prophesy?

Over the next few days I couldn’t shake the fear I felt in that moment and wondered if I was going to be able to do this, if was I making a big mistake. Our family has already been devastated by grief, could I knowingly make a choice that involves some level of risk? Oh Dear God, these inevitable losses will happen someday, I know full well, but please not now, nor anytime too soon, I just don’t think I could bear it quite yet.